Debs’ first experience in politics was as a young man in Terre Haute, where he served two terms as City Clerk beginning in 1879. In 1884, he ran successfully as a Democrat to represent Terre Haute in the Indiana General Assembly. History considers the 1885 State Assembly a productive legislature, but Debs did not see it that way and chose not to run for another term. By this time his official duties in the Brotherhood of Locomotive Firemen were demanding much of his time and energy, and the labor movement seemed to Debs to be a promising way to the achievement of his reformist goals.

The experience of the Pullman Strike taught Debs that major changes were necessary in our laws if workers’ rights were to be advanced, so after his release from Woodstock his efforts were turned more to the political arena. He eventually aligned with the American Socialist Party and ran five times as the party’s Presidential candidate.

Debs progressive idealism showed itself in his political activities. As City Clerk he shocked the morality of citizens by refusing to assess fines on prostitutes since the police were not bringing in the pimps or the business men customers of the women of this illicit trade. In the Socialist Party, Debs was not one for the intra-party squabbles and personal rivalries which often split the party. Debs was the idea man and the great communicator, the never-tiring campaigner and spell-binding orator. He was great at mixing and touching, or in setting down and persuading on a one to one basis. Through the first two decades of the 20th century, the Socialist Party was split over power struggles and differences of opinions, but always united in supporting Debs as its presidential candidate and leading symbol.

During these campaigns the Socialist Party put a number of issues on the national agenda and advanced perhaps by decades the legislation which achieved a number of objectives for working class America. The list includes women’s suffrage (large numbers of Debs supporters were women). It includes legislation restricting child labor, and protecting workers’ rights to join unions and when necessary to strike. It would also include workplace safety, on the railroads and in the mines and factories.

Debs was a tireless campaigner, but the pshysical demands of a presidential campaign were excessive. With no radio and television spots, and with little sympathetic coverage of Progressive, Third Party causes, there was no alternative but to travel incessantly, one city or whistle-stop at a time, in searing heat or numbing cold, before crowds large or small, in whatever hall, park or train station where a crowd could be assembled.

Different from the fury of the campaign trail during these years was his guest editorials for Appeal to Reason. Published in Girard, Kansas, Debs forceful journalism worked wonders for this progressive weekly as it had done earlier for Locomotive Firemens Magazine. Debs’ popularity built the readership of Appeal to as much as a million readers, and spread progressive, Socialist ideas to a readership coming from all walks of life and all social strata.

Debs of course wanted a good vote count, but he saw his presidential campaigns also as educational and his real concern was to spread awareness of his vision of a better society, where justice, fraternity and equality would prevail. Debs ran in 1900, 1904, 1908, 1912 and 1920, the last race from Atlanta Prison. The slogan on a campaign poster in 1920 read: “From Atlanta Prison to the White House, 1920,” and a popular campaign button showed Debs in prison garb, standing outside the prison gates, with the caption: “For President Convict No. 9653. “Debs received nearly one million votes that year! 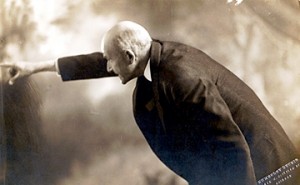 Perhaps the most colorful campaign was in 1908, when Debs used the Red Special Train to whistle-stop the country. There also was a Red Special Band. Debs spoke from the train to enthusiastic crowds dozens of times a day as he toured the country. Political campaigns before television generated interesting and sometimes novel memorabilia. A 1912 almanac (calendar) printed by the Socialist Party has the months of the year bordered by quotes from Debs such as “I’d rather vote for what I want and not get it, than for what I don’t want and get it.”

The measure of Debs and the Socialist Party is not in vote counts alone. A cartoon from the same 1912 campaign portrays the competition for progressive ideas by the parties, ideas such as voting rights for women, restrictions on child labor, and workers’ right to organize unions. It is highly doubtful if the Republicans and Democratics would have been giving at least lip service to such progressive ideas as early as 1912 had not the Socialists been popularizing these ideas since 1900. In the cartoon just mentioned, Debs is shown skinny dipping, and sees Teddy Roosevelt making off with his cloths. Another candidate is watching from behind bushes, minus his clothes, and says: “Don’t be too upset, Gene, he’s already taken ours.”

In recorded history and in popular imagination Debs is portrayed in extremes either positive or negative. The negative image portrays a radical labor baron, “King Debs,” trying to take over the railroads and destroy property rights, as unpatriotic anti-war extremist who failed miserably five times in tries for the presidency, or less negatively perhaps as a kind, great-hearted idealist who simply did not grasp the realities of economic life and human nature. The positive image shows a highly effective union leader of turn-of-the-century America, a kind, big hearted and deeply loved man, respected even by prominent Terre Haute business men who chose to overlook his radical leanings. Debs case is often cited as an example of the failure of our legal system to protect his constitutional right of freedom of speech. In organized labor there is enduring respect for Debs as one of the giants among the pioneers of the American labor movement. His kiosk stands in the Labor Hall of Fame, Department of Labor, Washington, DC as a tribute to his contributions to American labor. Labor Unions are among the most active supporters of the Eugene V. Debs Foundation and union members from across Indiana and the Midwest are in regular attendance each fall when an annual award banquet is held in Terre Haute.