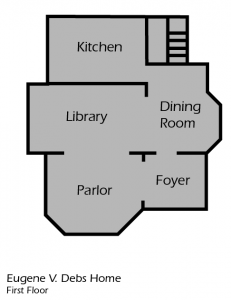 Eugene V. Debs (185-1926) was a pioneer labor leader and five times Socialist Party presidential candidate between 1900 and 1920 (excluding 1916, when he ran for Congress instead). This Victorian-style house was built by Debs and his wife, Kate, for $4500 in 1890, when Debs was 35. At that time this street was lined with comparably fine homes. Following Kate’s death in 1936, the house was successively a college professor’s home, fraternity house, and briefly, apartment building. The Debs Foundation was chartered in 1962, bought the house and began an extensive restoration project which was completed in 1965. The museum was officially made a National Historic Landmark in 1966, one of only eleven in Indiana.

Notice that the foyer has its own fireplace, one of seven in the house. One could question the “luxury” of heating with wood in those days! It may help organize your thoughts while going through the home to fit what you see into three categories representative of Debs’ multi-faceted life: there are personal items, others related to his railroad work and union leadership, and those related to his political and social reform activities.

Much of the furniture in the home originally belonged to Eugene and Kate Debs. Other pieces have been donated by relatives or friends interested in historic preservation. The beautifully restored Victorian sofa, chairs, tables, and vases in the parlor belonged to Eugene and Kate. Today this room looks very much as it did in the early 1920’s when Debs sat with his wife and nephew for the photo you see. In this room are several other photos of the Debs family. Eugene’s parents came to Terre Haute from near Colmar, the Alsace area of southeast France, so they were multi-lingual and were comfortable among the numerous French- and German-speaking people of Terre Haute.

One photo is of the Fourth Street home where Eugene was born and where the parents’ grocery business was started. The Debs family grew to include two boys and four girls, all shown in one photo. Theodore was ten years younger than his famous brother and became Eugene’s lifelong personal secretary, campaign manager, and personal confidant. The Foundation has established a Theodore Debs Distinguished Service Award in recognition of Theodore’s valuable contribution to Eugene’s work. The photo on the table shows Debs with his niece, Marguerite Debs (later Marguerite Debs Cooper), Theodore’s daughter. Marguerite was most helpful to the Foundation in the renovation and furnishing of this museum. She died at age 94 in late 1987.

Prominent in this room are the beautiful cherrywood bookcases and mantle. It is apparent that books were important to Debs. Although he quit school at age 14 to work, it no doubt was his love for reading which enabled him to become such a persuasive speaker and forceful writer. Most of the books displayed here were donated to the Foundation. A large number of books originally belonging to Debs are now housed in the Rare Books and Special Collections section of Cunningham Library, ISU, along with nearly 4,000 letters to and from Debs. There they are preserved under proper temperature and humidity control and are available under proper security to researchers. In this room is the famous Louis Mayer bust of Debs, one copy of which is in the Smithsonian in Washington Debs sat for this bust between sessions of his trial for violating the wartime Sedition Act by speaking out against U.S. involvement in World War I. He felt that the workers of both sides were being killed to benefit capitalists. For a speech in Canto, Ohio, he was sentenced to ten years in prison, and served time from April 1919 until Christmas Day, 1921, when President Harding commuted his sentence to time served. Debs’ last campaign for President was from Atlanta Federal Prison, in 1920, and his fight for freedom of speech and industrial democracy won him the admiration and respect of nearly a million voters. The inlaid-wood table in this room was made by one of Debs’ fellow inmates at Atlanta Prison.

This mahogany dining suite was owned by Kate and Eugene, The pieces fit the dimensions of the room as though made to specification. Donated in 1985 by a distant relative, the furniture was transported here from Corpus Christi, Texas and refinished. The Debses’ complete set of Haviland china has also been restored to the home. The unique case above the fireplace contains the original glass. In presidential campaigns, Debs’ opponents criticized such affluence in the home of a spokesman of the working class. At the time the house was built, Debs was employed as Grand Secretary of the Brotherhood of Locomotive Firemen and editor of the union’s Magazine. A high-ranking official with an annual salary of $3,000 (roughly $80,000 today), Debs could afford a comfortable home for his family. Debs spent an era marked by inequality fighting to make dignified life a reality for all.

None of the original kitchen furnishings have been preserved, but the room is filled with important memorabilia from Debs’ early years. On your left as you enter is a photo of Debs at age 14 (bottom far left) on his first job in the paint shop of the TH&IRR, although he rapidly graduated to fireman. The “For Rent” sign was painted by Eugene, who as a young man did such work as favors for friends. The center table is from the parents’ home, and many of the items displayed on the counter and elsewhere are from their grocery store or their home. A photo on the buffet shows the grocery store after it was moved to Wabash Avenue. The family lived in the rear of the store. Above the clock is the original charter of the Vigo Lodge of the Brotherhood of Locomotive Firemen. Debs joined this union as a charter member at age 19 and was immediately named secretary. He soon rose to national leadership in this organization as its Grand Secretary and Treasurer and editor of the BLF Magazine. Debs’ writing and speaking skills and tireless efforts increased union membership and made him a prominent figure in the American labor movement at that time. The glass case contains memorabilia relating to Debs’ work with this early craft union as well as mementos from his two terms as City Clerk of Terre Haute (beginning at age 24) and his term as a Democrat in the Indiana General Assembly (age 30).