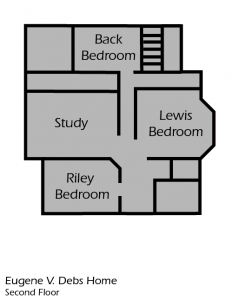 The former master bedroom honors John L. Lewis for his efforts on behalf of the United Mine Workers. Lewis was the recipient of the first annual Eugene V. Debs Award in 1965. The room also focuses on Debs’ contributions to organized labor during the next phase of his career (in his late 30’s), as he rejected craft unionism in favor of industrial unionism. In 1893, Debs founded the first industrial union in the United States, the American Railway Union (ARU). In contrast to the railroad unions, which had separated workers by craft, e.g., as brakemen, firemen, switchmen, engineers, etc., this industrial union organized all workers on the railroads in a single union for much greater solidarity. The charter for one of the ARU’s local branches hangs on the wall near the bust of Lewis. A pamphlet on industrial unionism written by Debs is displayed in the glass case along with loving cups presented to Debs by admirers, old coal miners’ lamps, and other labor memorabilia. The other glass case contains items relating to the times Debs spent in jail or prison for the sake of the causes he believed in. Debs is quoted on a plaque in this case which reads, “I would rather be jailed a thousand times than once betray the working class.” Here are the keys to Debs’ cell and cell block at Woodstock Jail, near Chicago, where in 1895 Debs spent six months for violating the anti-strike injunction during the famous Pullman Strike. Also displayed here is an elaborately carved cane given to Debs by a fellow inmate at Atlanta Federal Prison, evidence of the high esteem in which Debs was held by fellow prisoners. Walls and Bars is a collection of articles Debs wrote about the U.S. prison system based on his own first-hand experience. He felt that most of the prisoners he met,no matter how hardened, were not born criminals, but had been pushed toward a life of crime by poverty and social injustice. He believed that society must focus on alleviating these conditions which breed crime rather than simply trying to solve the problem with prisons.

Notice that the foyer has its own fireplace, one of seven in the house. One could question the “luxury” of heating with wood in those days! It may help organize your thoughts while going through the home to fit what you see into three categories representative of Debs’ multi-faceted life: there are personal items, others related to his railroad work and union leadership, and those related to his political and social reform activities.

Here are certificates honoring some of the past recipients of the Debs Award, which is presented each fall at the Debs Award Banquet to an individual who has worked toward labor or social reform in the Debsian tradition.

Eugene and Kate called this their Riley Room because their friend, the noted Hoosier poet, was a frequent guest here. On the table beside the bed is a notebook containing photocopies of letters from Debs to Riley, and the bottom shelf of one glass case shows a photo of Riley and the preserved manuscript of a poem titled “Them Flowers,” which Riley dedicated to Debs. Also in this room is memorabilia relating to the next phase in Debs’ career (beginning in his early 40’s), in which he turned to democratic socialism as an answer to the problems of labor. The ARU had been a strong union, but even it had proven powerless when the government sided with big business to crush the Pullman Strike. Since the government had denied workers their right to strike, Debs became convinced that political and social change would be necessary before the workers’ rights could be successfully advanced. Leading socialists such as Victor Berger visited Debs in Woodstock Jail to discuss socialism, and in 1897 Debs finally announced, “I am for Socialism because I am for humanity.” In this year, Debs and the other leaders of the dissolved ARU founded the Social Democracy of America with Debs as chairman. Hanging near the entrance of the room is the charter for one of the local branches of this new party. In the glass case (middle shelf) is a photo of the 1901 convention at which this party renamed itself the Socialist Party of America. Debs had no personal political ambitions but, out of a sense of duty, accepted the nomination to run as the party’s candidate for president in 1900, 1904, 1908, 1912, and 1920. He did not expect to win any of these races, but saw his candidacy as a way to educate the public and lay a foundation for future socialist candidates. In this case are also displayed a photo of the Red Special, the train Debs used to campaign across the country in the 1908 election,campaign buttons and other memorabilia, and (bottom shelf) a large photo of Debs receiving the Socialist nomination to run for president in 1920 while still in Atlanta prison. The 1920 campaign button carried the slogan “For President…Convict No. 9653” with a photo of Debs in prison garb. Other items in the glass cases in this room include Socialist Part pamphlets, several of them written by Debs, and books autographed for Debs by famous authors. The Victorian three-quarter bed and dresser are original to the home, and the wardrobe belonged to Eugene’s parents.

The slender, yellow poplar bookcase on the left as you enter was bought by Eugene while still living with his parents. The large glass case has been dedicated to Kate Debs and contains such personal effects as her scrapbooks, marriage license, and wedding photo (Debs was age 30 when they married). The relationship between Kate and Eugene’s work has been debated. Some considered her detached and snobbish, an “adversary in the house,” reflecting her upper-middle class social origins. However, the scrapbooks displayed here (found only in the 1960’s), along with her personal mail, reveal that she closely followed all of Gene’s work, but she chose to stay home and make this a quiet and private place for him to come home to.

The large photo of Debs on the mantle is one of the last taken at Lindlahr Sanitarium in Elmhurst, Illinois, just a few weeks before his death on October 20, 1926, at age 70. The leather-upholstered chair was used by Debs in this study. On the desk is a volume containing original copies of the Appeal to Reason, a Populist weekly magazine published in Girard, Kansas. Debs was named Associate Editor of this publication in 1907, and his guest editorials helped extend its readership between 1907 and 1912. This desk was used by Debs at the Socialist Party national headquarters in Chicago during the 1904, 1908, and 1912 presidential campaigns. Notice the quote by Debs on the socialist almanac above the desk: “it is better to vote for what you want and not get it, than to vote for what you don’t want and get it!” In his most successful campaign, in 1912, Debs received nearly a million votes,six percent of the popular vote. While Debs was a Socialist and considered a radical in his day, he advocated many reforms which were later made into law in the U.S. He championed the rights of women, children, and minorities, safe working conditions, and the 8-hour workday. The Socialist Party platforms called for safety regulations in industry, unemployment and welfare benefits, and social security-type legislation. As you exit the room notice the framed 1904 ballot.

On your left are historic photos from Debs’ funeral, including the service, preached by Norman Thomas, which took place on the porch of this house and was attended by nearly 5,000. Debs’ ashes are buried in the family plot in Highland Lawn Cemetery on U.S. 40, east of Terre Haute. On your right are photos from several Socialist Party national conventions. In the glass case at the end of the hallway are a number of personal effects which belonged to Eugene’s brother Theodore, as well as photos of Theodore’s wife Gertrude and daughter, Marguerite Debs Cooper.

Originally designed for a housekeeper, this room was used as an office by Debs following his release from Atlanta prison. It is now furnished with items from Debs’ former Wabash Avenue office. The impressive old secretary contains original Socialist pamphlets, many written by Debs. Theodore made use of the desk and typewriter when answering Eugene’s voluminous correspondence from across the country and throughout the world. On display are photos showing Debs’ close relationship with the family of Carl Sandburg and such personal effects as Eugene’s wallet, watch, toilet items, and ring. The notebook contains copies of correspondence between Debs and famous writers of his day.